On the 3rd of May 2016 the second edition of the Science meets Business Plan Competition was hosted in the Biotech Training Facility. The evening, mediated by CHDR’s CEO Adam Cohen, was  a great success!

During the event, five innovative and enthusiastic start-ups pitched their business ideas to the public and the standing buffet and networking drinks allowed the attendees to further discuss and reflect on science and business in the Leiden environment.
The winner of the 2016 SmBPC prize was Buxenus, a start-up that develops lab hardware to drastically reduce the time scientists spend on tasks that can be automated. Their convincing presentation led the jury to grant them the Grand Prize of €2000,- sponsored by Iventus and CHDR and the Wild-Card to the Gulliver competition’s finale.
The audience award, realized and granted by Luris‘ Tim de Jong, was won by NADES Solutions, a start-up which aspires to develop custom solvents to life science companies in order to increase their research efficacy. Their presentation won over the hearts of the audience, and earned them a cheque of €500,- to further boost their enterprise.
The other three contestants, AEH Concepts, MiP and Filterless, also did a very good job presenting their ideas, and received ample feedback from both jury and audience to further elevate their start-up.
The Science meets Business team would, once again, like to congratulate the winners and wish all participants good luck in their further endeavors. We would also very much like to thank the attendees for their presence, and would like to invite you all to the SmB-Cafes and next year’s edition of the Science meets Business Plan Competition! 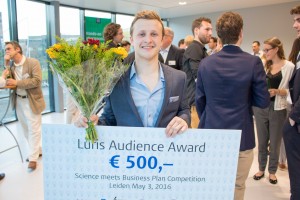 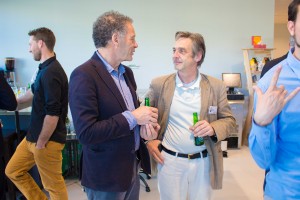 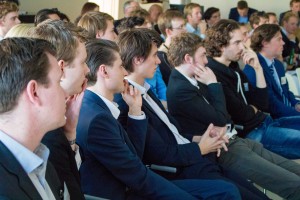 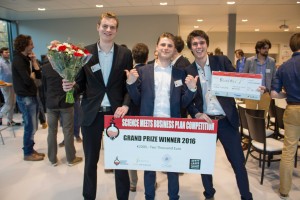